It has been 2 months for not participating in the MY CREATIVE SKETCHES' MONTHLY CONTEST due to house-move, holiday and business trips. Once everything was settled down last month, I urge myself to create a layout and get it done fore the deadline on 14th July.

This is the MCS June/July sketch which is actually quite familiar....

The theme of this layout is Giant Duck - For those who are in Hong Kong, we have been desperate for visiting this 32-meter tall duck which has been sitting on the Victoria harbour for a month. The duck is an art piece created by a Dutch artist

I took my girls to take a closer look at the giant duck on its last day in Hong Kong, i.e. 9th June.

To create a background highlighting sea waves, I applied some LIGHT MOLDING PASTE over a STENCIL of wave pattern. I sprayed a thin layer of Shimmer blue colour mist over the mold.

I cut out the Giant duck from the photo, and outlined it.

On the top left hand corner, I made the SUN by cutting out a small circle from an embossed swirl pattern paper, I added a few small pieces of ribbon. And yes it was a sunny day when we went to visit the duck.

There is a big circle on the background of the layout, I cut a circle out using Martha Stewart circle cutter, I hand-wrote some notes on it.

Last month I went for an holiday in Los Angeles and I found this pair of cutie yellow duck buttons from JoAnn Store, which are very suitable for this layout.

I stamped some rainbow arrows over the background using the ARROW ROLLING STAMP.... I actually tried to stamp it neatly on the page, however it failed. So I just rolling back and forth and created this messy stamping pattern, which is quite good for the layout

This layout turns out nicely and gives some feeling of mixed media. Thanks for MCS for their sketch idea! 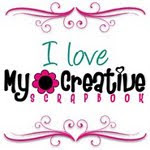 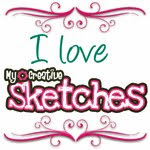